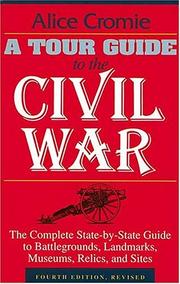 A tour guide to the Civil War

This book is a coffee table-sized paperback. Printing and binding are good quality. The design of the book is such that it can be used as an on-site tour guide to Civil War St. Louis. Current directions, locations, and street names are given along with War era descriptions of the sites/5(5).   "Civil War Battlefields: A Touring Guide provides a detailed. accurate and modern approach to touring these national treasures.", Kentucky Monthly " of all the books written about the war none provided any detailed information about what could be seen at the major sites. This book triest to remedy that oversight." -- June Sawyer, Chicago TribuneReviews: 6.   Packed with color photographs, more than historic battlefield and additional Civil War related sites, walking tours, 50 detailed maps, and the collective expertise of Civil War historians and dozens of park service experts, this handy, practical guide offers comprehensive information on the more than sites recognized by the National Reviews: Since , she has had the privilege of working with legendary historian and battlefield guide Edwin C. Bearss. She has designed and escorted scores of Mr. Bearss’ history tours focusing on the Civil War, American Revolution, Indian Wars, and World War II.